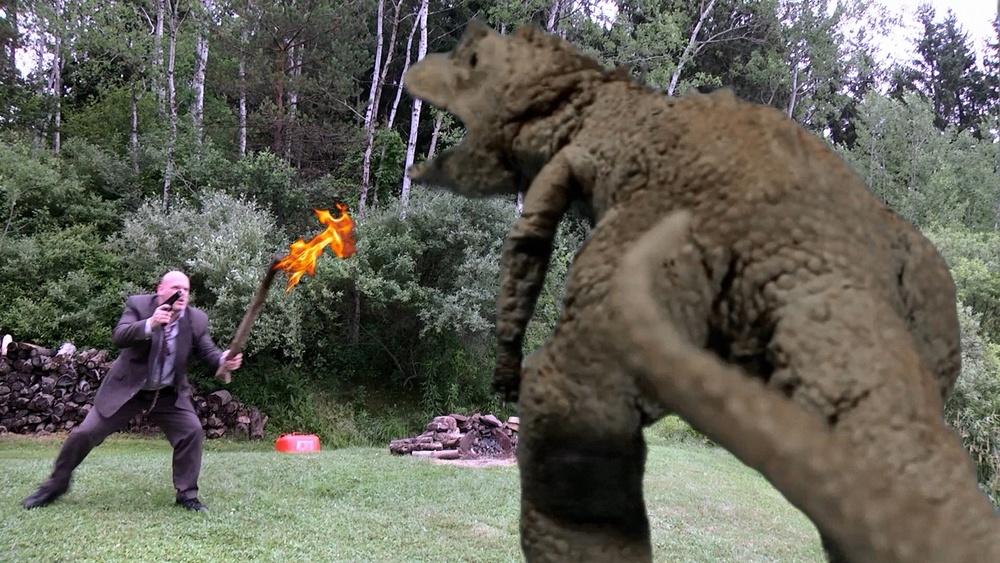 What do you do if you wanted to make a movie about bears but then ran of money to buy a bear costume? You CGI in a shitty dinosaur.

It’s 2015 and the Polonia brothers think they they are the new Asylum Production Company. They’re cranking out shark and prey straight-to-video movies at a rate of one every month. They dont have time to care about budgets, story, continuity, actors, props, scripts, or cgi models that match the costume that they rented.

Jurassic Prey is about this woman that withdraws money form a bank and plans to run away. At the same time, there is a bank robbery by three of the dumbest criminals on the planet. Their car doesn’t start and they decide to hijack the woman. She declines and then offers to be their getaway driver. She drives them to some someone’s cabin in the woods. At the cabin, there is an animal that walks on pathways and if it encounters another person on the path, they don’t hear it and it kills them. This animal is referred to as a bear throughout the movie. But every visual of the animal is a dinosaur that is away from people or in the distance. There are scenes where they get an actor to act like he’s fighting something and the producers just superimpose a shitty dinosaur on the image. That CGI dinosaur looks completely different to the costume. I think there were two different CGI models that played the same character.

The woman tries to escape the hijackers and random scenes happen and everyone but the main woman dies from bear attacks. There are some funny deaths. One memorable death was a decapitation. One of the hijackers wears a hat and sunglasses throughout the movie so that when they show his head, they can put the hat and sunglasses on it and the audience won’t be the wiser.

This movie is awful. Do not watch it.